25 Offbeat Words for Your Vocabulary, Courtesy the Grateful Dead

21/05/2019 No Comments on 25 Offbeat Words for Your Vocabulary, Courtesy the Grateful Dead 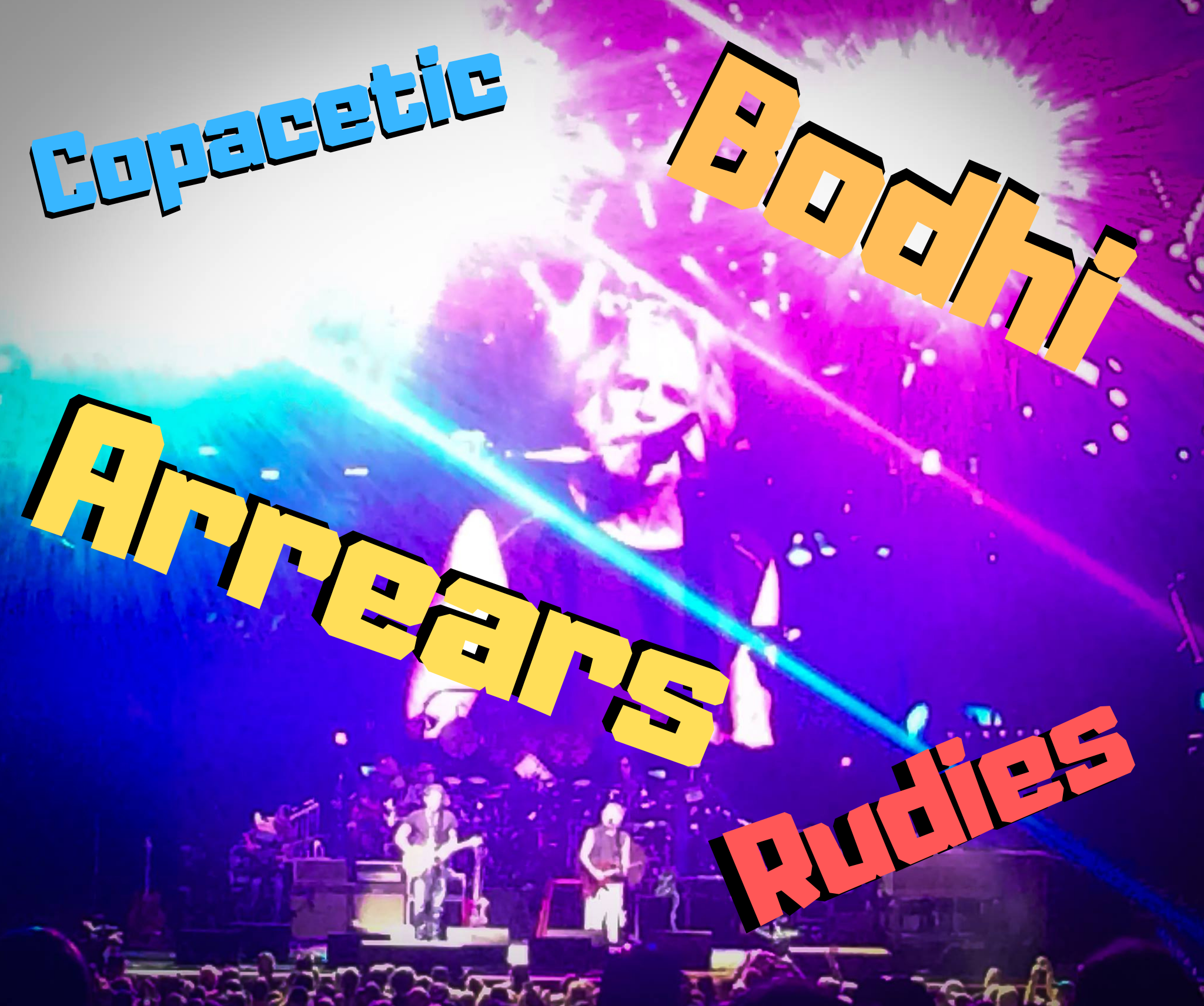 The current incarnation of the Grateful Dead, Dead & Company, playing in Charlotte in 2016. (Photo and graphic by Michael Stone)

The Grateful Dead composed many dozens of original songs over their 30-year career, from “The Golden Road,” the first track on their self-titled debut album in the mid-’60s, to a few in the early to mid-’90s that didn’t make it onto an album before Jerry Garcia passed away.

Garcia was the main musical composer, while the primary lyricist was Robert Hunter, the only non-performer inducted into the Rock & Roll Hall of Fame. Other contributions came from a variety of musicians and writers out of and in the band, including Bob Weir and John Perry Barlow, whose partnership generated many Dead staples.

The Dead’s songs take us through a variety of adventures — life on the road, enjoying the outdoors, a dystopian future, drug-fueled hallucinations, the ways and troubles of the workingman, and navigating death and dying. These themes, atypical to popular music, lend themselves to daring lyrics and, more specifically, uncommon word choices.

In recognition of this imaginative, rousing, expressive songwriting, here are 25 of my favorite offbeat word choices from the Dead. Hope you like them and their accompanying lyrics, too. Maybe you could even find a chance to more often slip one or three into your vocabulary.

1. Arrears
Song: Touch of Grey
Lyrics: I know the rent is in arrears / The dog has not been fed in years / It’s even worse than it appears / but it’s all right.
Definition: Something overdue in payment; a debt that remains unpaid. (from dictionary.com)

2. Bebop
Song: Loose Lucy
Lyrics: Bebop baby, how can this be / I know you’ve been out a cheating on me / Round and round and round and round / Don’t take much to get the word around / Cross my heart and hope to die / I was just hanging out with the other guys.
Definition: Early modern jazz developed in the early 1940s and characterized by often dissonant triadic and chromatic chords, fast tempos and eccentric rhythms, intricate melodic lines punctuated by pop-tune phrases, and emphasizing the inventiveness of soloists. (from dictionary.com)

3. Begonias
Song: Scarlet Begonias
Lyrics: She had rings on her fingers and bells on her shoes / And I knew without asking she was into the blues / She wore scarlet begonias, tucked into her curls / I knew right away she was not like other girls / Other girls.
Definition: Any tropical plant belonging to the genus Begonia, including species cultivated for the handsome, succulent leaves and waxy flowers. (from dictionary.com)

5. Calliope
Song: St. Stephen
Lyrics: Fortune comes a crawlin’, calliope woman / Spinning that curious sense of your own / Can you answer? Yes I can / But what would be the answer to the answer man?
Definition: A musical instrument consisting of a set of harsh-sounding steam whistles that are activated by a keyboard. ALSO: the Muse of heroic poetry. (from dictionary.com)

6. Chateau
Song: West L.A. Fadeaway
Lyrics: Looking for a chateau / Twenty-one rooms but one will do / I don’t want to buy it / I just want to rent it for an hour or two.
Definition: A stately residence imitating a distinctively French castle. (from dictionary.com)

7. Commissar
Song: Throwing Stones
Lyrics: Commissars and pin-stripe bosses / Roll the dice / Any way they fall / Guess who gets to pay the price / Money green or proletarian gray / Selling guns ‘stead of food today.
Definition: An official in any communist government whose duties include political indoctrination, detection of political deviation, etc. (from dictionary.com)

9. Doodah
Song: Truckin’
Lyrics: Truckin’, got my chips cashed in / Keep truckin’, like the doodah man / Together, more or less in line / Just keep truckin’ on.
Definition: An unnamed thing, esp. an object the name of which is unknown or forgotten. ALSO: Excited; agitated. (from dictionary.com)

10. Grenadine
Song: Brown-Eyed Women
Lyrics: Brown-eyed women and red grenadine / The bottle was dusty but the liquor was clean / Sound of the thunder with the rain pouring down / And it looks like the old man’s getting on.
Definition: A syrup made from pomegranate juice, used as a sweetening and colouring agent in various drinks. (from dictionary.com)

11. Major-domo
Song: Alabama Getaway
Lyrics: Majordomo Billy Bojangles / Sit down and have a drink with me / What’s this about Alabama / Keeps comin’ back to me?
Definition: A man in charge of a great household, as that of a sovereign; a chief steward. (from dictionary.com)

12. Nuthatch
Song: Eyes of the World
Lyrics: Right outside the lazy gate of winter’s summer home / Wondering where the nuthatch winters / Wings a mile long just carried the bird away.
Definition: Any of numerous small, short-tailed, sharp-beaked birds of the family Sittidaethat creep on trees and feed on small nuts and insects. (from dictionary.com)

14. Quasar
Song: Greatest Story Ever Told (originally “guitar” but soon changed to “quasar”)
Lyrics: Moses came riding up on a quasar / His spurs were a-jingling, the door was ajar / His buckle was silver, his manner was bold / I asked him to come on in out of the cold.
Definition: One of over a thousand known extragalactic objects, starlike in appearance and having spectra with characteristically large redshifts, that are thought to be the most distant and most luminous objects in the universe. (from dictionary.com)

15. Rudies
Song: Throwing Stones
Lyrics: Click flash blade in ghetto night / Rudies looking for a fight / Rat cat alley, roll them bones / Need that cash to feed that jones.
Definition: A rude boy or, specifically, a member of a youth movement originating in Jamaica in the 1960s. (from Collins Dictionary)

16. Rushes
Song: Sugar Magnolia
Lyrics: Sweet blossom come on under the willow / We can have high times if you’ll abide / We can discover the wonders of nature / Rolling in the rushes down by the riverside.
Definition: Any grasslike plant of the genus Juncus, having pithy or hollow stems, found in wet or marshy places. (from dictionary.com)

17. Shadowboxing
Song: My Brother Esau
Lyrics: Esau skates on mirrors anymore / He meets his pale reflection at the door / Yet sometimes at night I dream / He’s still that hairy man / Shadowboxing the Apocalypse / And wandering the land.
Definition: To evade or avoid direct or decisive action. (from dictionary.com)

19. Stetson
Song: Stagger Lee
Lyrics: 1940 Xmas evening with a full moon over town / Stagger lee met Billy DeLyon / And he blew that poor boy down / Do you know what he shot him for? / What do you make of that? / ‘Cause Billy DeLyon threw lucky dice / Won Staggelee’s Stetson hat.
Definition: A brand of felt hat with a broad brim and high crown, especially one worn as part of a cowboy’s outfit. (from dictionary.com)

20. Switchman
Song: Casey Jones
Lyrics: Switchman sleepin’ / Train hundred and two / is on the wrong track and / headed for you.
Definition: A person who has charge of a switch on a railroad. (from dictionary.com)

22. ‘Twixt
Song: St. Stephen
Lyrics: Wishing well with a golden bell / Bucket hanging clear to hell / Hell halfway twixt now and then / Stephen fill it up and lower down / And lower down again.
Definition: Contraction of betwixt (between). (from dictionary.com)

23. Victrola
Song: One More Saturday Night
Lyrics: Turn on channel six, the President comes on the news / Says, “I get no satisfaction, that’s why I sing the blues” / His wife say “Don’t get crazy, Lord, you know just what to do / Crank up that old Victrola, put on them rockin’ shoes.”
Definition: A brand of phonograph. (from dictionary.com)

24. Wherefore
Song: When Push Comes to Shove
Lyrics: Shaking in the desert, wherefore do you cry? / Here there may be rattlesnakes to punch you in the eye / Shotguns full of silver, bullets made of glass / String barbed wire at your feet and do not let you pass / When push comes to shove, you’re afraid of love.
Definition: For that cause or reason. ALSO: For what? Why? (from dictionary.com)

25. Willys
Song: Sugar Magnolia
Lyrics: She can dance a Cajun rhythm / Jump like a Willys in four wheel drive / She’s a summer love in the spring, fall and winter / She can make happy any man alive.
Definition: Made by the Overland Automotive Company, a jeep-type vehicle no longer in production. (from The Annotated Grateful Dead Lyrics)