Stephen King Quotes: My top 10 blueberries from ‘On Writing’ 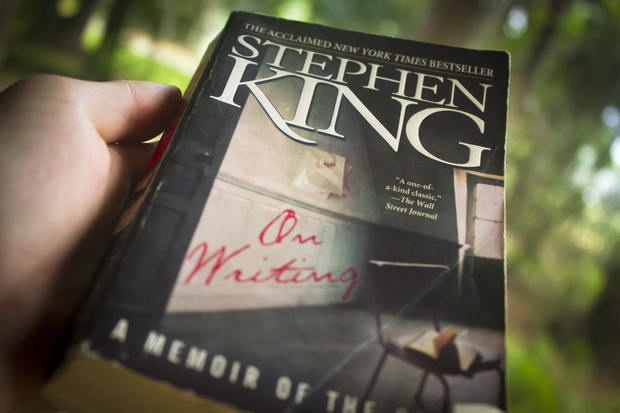 Photo of my copy
—

In On Writing, the horror master offers the inside scoop about himself, how he climbed the ladder to literary stardom, his drug and alcohol addictions, and the 1999 wrestling match with a minivan that, as he put it, turned his lap sideways.

There is, of course, a great deal of pointers on how you, yes you, can become a magazine or paperback god. While I think some of this is confined to King’s process and might not translate to everybody (which he’d admit himself), the book does serve a hearty plate of inspiration, following the author from poor to big time thanks to his breakthrough novel, Carrie.

But regardless if you’re reading for tips on writing or not, King’s wit is enough to carry the book along as somewhat of a lengthy humor essay, each section a bush with almost as many blueberries as there are leaves. Here are the 10 blueberries I found to be the juiciest:

1. In many ways, Eula-Beulah prepared me for literary criticism. After having a two-hundred-pound babysitter fart on your face and yell Pow!, the Village Voice holds few terrors.

2. “They were camped in a big dratty farmhouse room,” I might write; it was another year or two before I discovered that drat and draft were different words. During that same period I remember believing that details were dentals and that a bitch was an extremely tall woman. A son of a bitch was apt to be a basketball player.

3. She was the National Honor Society advisor at LHS, and when my name showed up on the candidate list two years later, she vetoed me. The Honor Society did not need boys “of his type,” she said. I have come to believe she was right. A boy who once wiped his ass with poison ivy probably doesn’t belong in a smart people’s club.

4. Then, in the early eighties, Maine’s legislature enacted a returnable-bottle and –can law. Instead of going into the trash, my sixteen-ounce cans of Miller Lite started going into a plastic container in the garage. One Thursday night I went out there to toss in a few dead soldiers and saw that this container, which had been empty on Monday night, was now almost full. And since I was the only one in the house who drank Miller Lite—

5. I have my own dislikes—I believe that anyone using the phrase “That’s so cool” should have to stand in the corner and that those using the far more odious phrases “at this point in time” and “at the end of the day” should be sent to bed without supper (or writing-paper, for that matter).

6. The reader must always be your main concern; without Constant Reader, you are just a voice quacking in the void.

7. The most important things to remember about backstory are that (a) everyone has a history and (b) most of it isn’t very interesting. Stick to the parts that are, and don’t get carried away with the rest. Long life stories are best received in bars, and only then an hour or so before closing time, and if you are buying.

8. Frank doesn’t need promises; like most beginning writers, all he needs is a little encouragement and an unlimited supply of take-out pizza.

9. Writing isn’t about making money, getting famous, getting dates, getting laid, or making friends. In the end, it’s about enriching the lives of those who will read your work, and enriching your own life, as well. It’s about getting up, getting well, and getting over. Getting happy, okay? Getting happy. … Writing is magic, as much the water of life as any other creative art. The water is free. So drink. Drink and be filled up.

10. And what about those critiques, by the way? How valuable are they? Not very, in my experience, sorry.