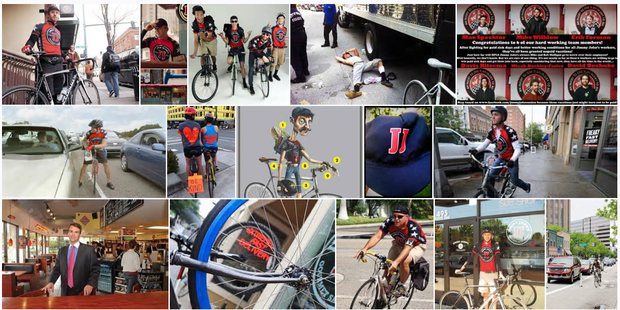 —
Last night, I was driving on University Avenue about 6:30 p.m. to watch the UF basketball game against Southern Texas. As I was passing the campus on my left, a Jimmy John’s delivery bicyclist cut right in front of my car while making a left-hand turn off campus and onto University Avenue.

The bicyclist, who did have a flashing front light but was poorly lit overall, was pedaling so fast that I didn’t notice him until he was feet away from my front bumper. We’re both very fortunate there wasn’t a serious accident.

Because of the proximity to the store, this bicyclist is probably an employee of the Jimmy John’s in Midtown on University Avenue. The Gainesville Police Department has had to issue many tickets to the store’s riders, many of which are unpaid, the Gainesville Sun reported in October.

From the Sun article:

“Police say they are frustrated not only with the continued unsafe cycling but also with a lack of responsiveness from the sandwich shop’s manager.

“Sgt. Joe Raulerson, who heads the GPD traffic unit, said the department has spoken with the owner, manager and other company officials multiple times, but the delivery cyclists continue to bike in ways that endanger themselves and others.”

It’s not just motorists or the delivery cyclists who are in danger, but also pedestrians. As one Indianapolis man wrote:

“Yes, I understand that part of your shtick is to promise that your food will be delivered really quickly. It’s catchy and your commercials are funny-ish. But you know what? I shouldn’t have to walk in fear of injury because you have a reputation to uphold.

“Neither I nor any other pedestrian should ever have to jump out of the way as one of your bike delivery people flies by weaving in and out of pedestrians on crowded sidewalks.”

Though driving a car, one Jimmy John’s deliverer killed a Morgantown, West Virginia, pedestrian in 2013. From the Pittsburg Post-Gazette:

“Jimmy John’s, the ubiquitous sandwich-maker that boasts speedy delivery times, is being accused of putting too much emphasis on punctuality and not enough on safety. …

“In a complaint filed against the company, the attorney for Mr. McClain’s daughter, Linda Lutman, contends that the emphasis on speed created working conditions that endangered the public and helped cause Mr. McClain’s death.”

Just watch how the crazy deliverers drive in these undercover videos in a report from the Louisville, Kentucky NBC affiliate.

In a previous Sun article from 2013 also highlighting the recklessness, a police spokesman gave the examples of one cyclist getting two citations in the same day for weaving in and out of traffic, and about five separate cyclists all being cited on a different single day.

Other infractions include running stop signs and red lights.

I applaud Gainesville police, and any other police departments around the country, that are taking on this public-safety hazard that almost led to me colliding with a bicyclist last night.

There’s no shortage of articles on Jimmy John’s riders getting hit—and, in at least one case, killed—around the country: in Fort Worth, Texas; Greensboro, North Carolina; Boise, Idaho; Seattle, Washington; Colorado Springs, Colorado; Omaha, Nebraska; and even Gainesville.

It certainly isn’t the bicyclist’s fault in many of the accidents, and I’m all for alternative modes of transportation. But my point is this: When your company motto is “freaky fast delivery” and deliverers are taking to the streets in undeniably reckless and deadly ways, whether it be at the encouragement of more tips or the company, something has to be done.

Drop the slogan, and institute company policies that encourage safe, rather than just fast, delivery. That way, you’ll deliver like everyone else: within the laws of the road.

Until Jimmy John’s does, I would encourage everyone to choose a different restaurant for your fast-food-sandwich fix.