Birdwatching in Your Florida Apartment: Attracting Birds to the Porch and What Species to Expect

06/08/2014 No Comments on Birdwatching in Your Florida Apartment: Attracting Birds to the Porch and What Species to Expect 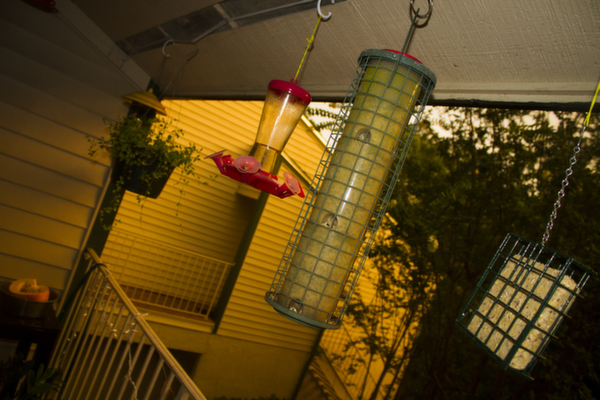 Nothing amazes me more than wild animals. So I got the idea of bringing them to me as I get work done from home—an ever-changing zoo exhibit of my own, if you will.

No, having a bird feeder is nothing new, as my grandparents would tell you. But, as I lack their expansive yard and woods, I wondered if I could attract some winged friends to my little second-story section of fresh air. Turns out, I have the power to build a busy bird airport.

The first thing I did was find the studs in the porch ceiling, pull some clothesline tight across it, and anchor the line in at the studs with some fencing nails.

I’ve found that having some type of rope system from which to hang and adjust things is better than drilling several different hooks in only to later realize you wish they were somewhere else. You might not have access to a wooden roof, so any cable you can string up should work fine.

Besides various plants, my complete collection includes: two seed feeders, two hummingbird feeders, one suet feeder, a hanging bird bath, a ground bird bath sitting on a table, and two bird houses rigged to hang against the walls. You can see some of this in the above photo.

I will say that the bird baths get used rarely, the suet feeder won’t come into play until its colder so it won’t get melty and attract maggots, and it’s too late in the season for bird-house babies.

So if you narrow your “gear” down to just a seed and hummingbird feeder, you’ll be the most popular wingless kid in town—at least I have with these guys this summer:

Cardinals were my first customers, and they’re by far the most frequent. Among the loyal shoppers are a mom, dad, and their three “babies” (birds grow to adult size very quickly), who turn the porch into a cardinal party daily. Put some seed out, and the cardinals will be there. 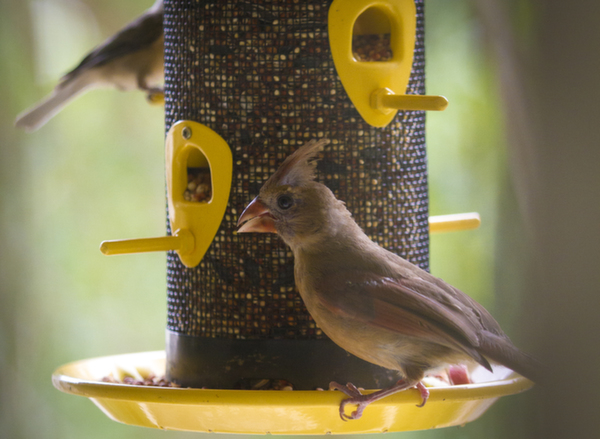 These flyers stop by just as often as the cardinals, only the main group is a pack of three instead of five. Again here, put the seed out, and they’ll grace you with their presence. 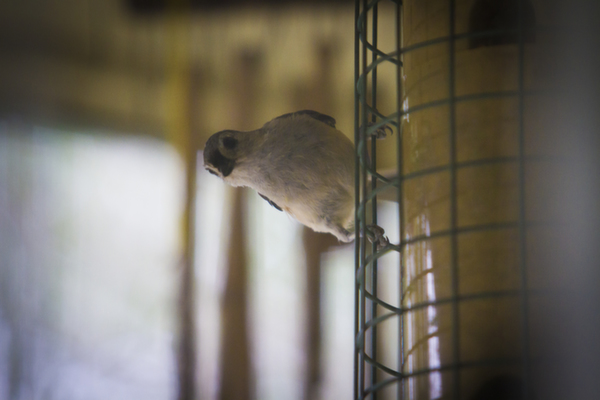 Though the chickadees don’t seem to fly in as often as the cardinals and titmice, they do come several times a day. They might not appear right when you get your stuffed rigged up like cardinals, but it is almost an eventual guarantee. 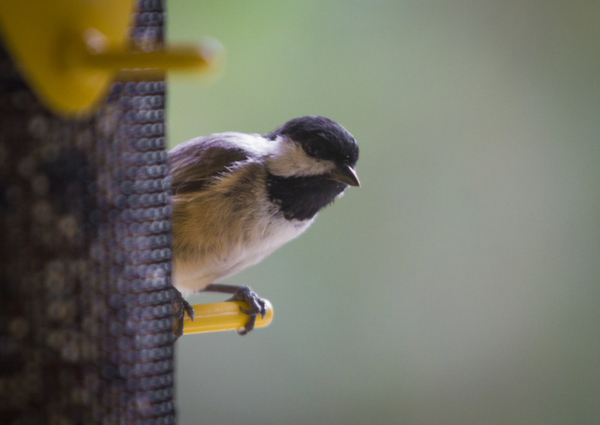 Starring at a chart of all the different hummingbird species gives me a headache, so I’ll let you figure out which one is out there appreciating your porch. Hummers of course don’t eat seed, so you’ll need to buy a special feeder for them. It’ll be red, to give the look of an eye-catching flower, and the recipe of three parts water to one part sugar should do the trick. I had the feeders up for a few weeks before spotting my first hummer, so be patient—once they do know you’re there, you’ll probably spot one several times an hour. One more note of interest: Oddly for their size, these fast-flying creatures are highly territorial and will relentlessly chase other hummingbirds and, comically, birds much bigger than them. 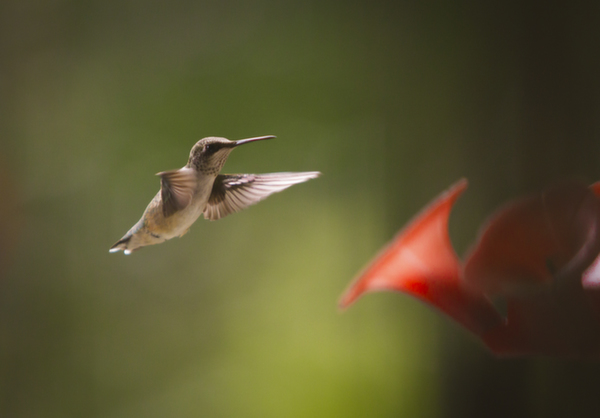 The wrens aren’t really seed eaters, so I don’t know why I still get visits. I think one or a couple still remember the suet I had out before I learned you should reserve it for months away from the hot, hot heat. But yes, they do like suet, so have that ready once it’s not boiling outside. 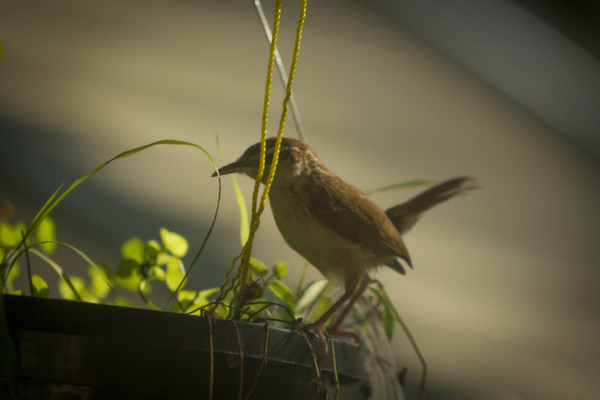 There’s one guy (seen below) that likes to visit in the mornings, but certainly not that often. Maybe more when it gets colder? They do like seed, sunflowers specifically, and suet. 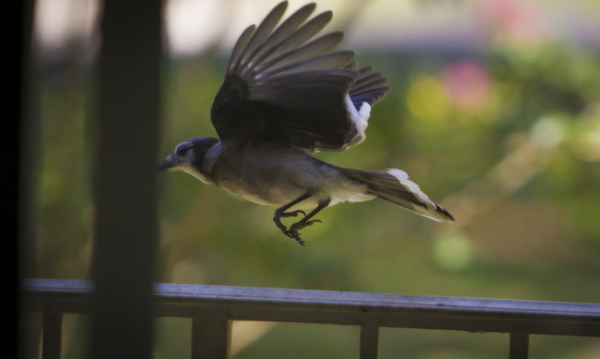 Doves represent the ground crew, the ones that clean up the seed mess that the other birds knock loose from the feeders. If you’re above ground floor, you might not always see them, but they’ll be around, waiting to sound off loud and clear as soon as they get startled and fly away. 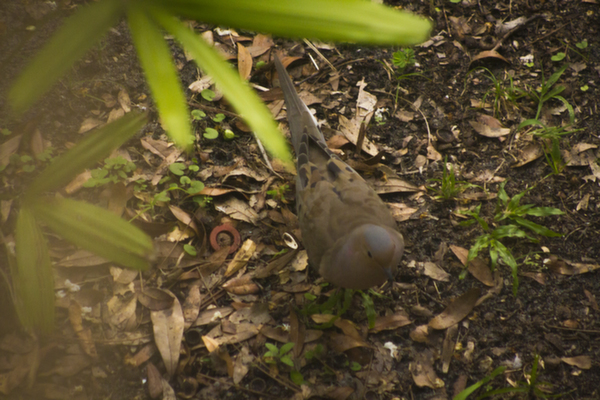 I don’t care if your apartment is in an airplane: Squirrels will figure out a way to get to your seed bird feeders. They will shimmy up pipes, lower themselves from roofs, and unscrew lids. The only foolproof weapon I’ve found is bringing in your feeders when you’re going to be gone for a long time. It’s no fun for you or the birds, but it’s better than having a pack of rodents decimate a month’s worth of seed in an hour. 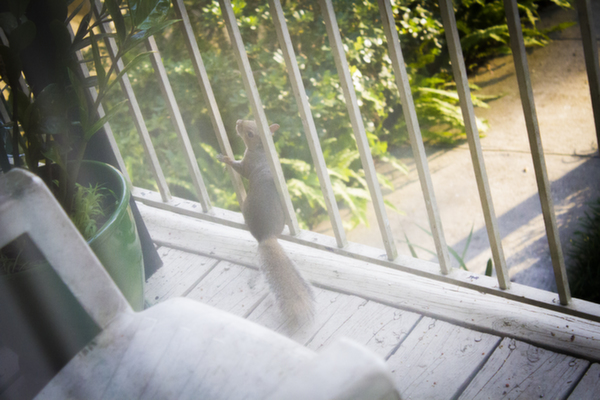