Gray Squirrels Can Be Orange? I’m in Disbelief, Too 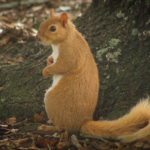 Eastern gray squirrels — those cute but pesky rodents who always find a way to get to even the most well-guarded birdfeeders in the right half of the U.S. and into Canada — seem uniform in action and appearance.

But on a recent venture through a park in downtown Tampa, I spotted one that broke the mold: an orange, yes orange, eastern gray squirrel. The species does tend to have tinges of the color in its coat, but as you can see from the photos and video above, the individual is clearly orange. 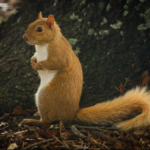 There are more generally orange squirrels — the eastern fox squirrel in North America and the red squirrel in Europe and Asia — but the one I saw clearly has the characteristics of an eastern gray.

However, I don’t blame you if you think I’m a little crazy because there doesn’t seem to be any mention of such a morph in general Web or academic searches — except for one forum post to WhatBird.com.

So if you know I’m not crazy and have seen an orange one yourself, please tell me in the comments!