20/06/2014 No Comments on PHOTOS: WWII Battle Damage Remains in Berlin 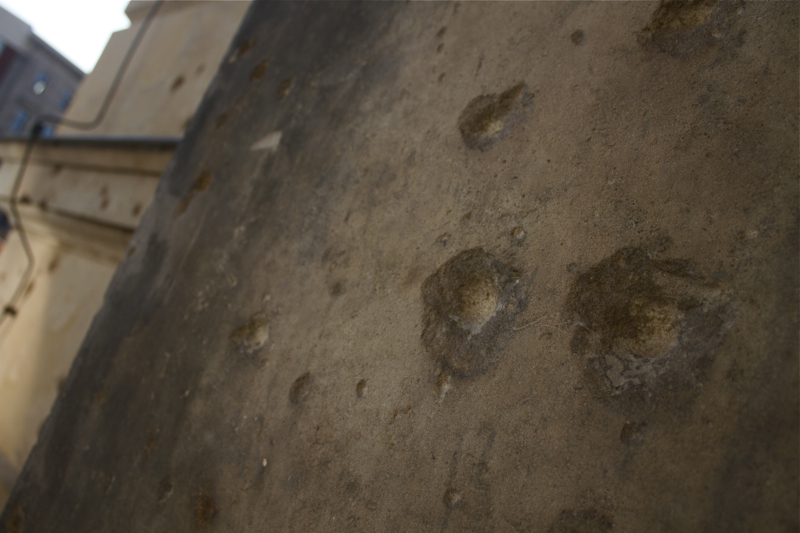 Hundreds of clearly visible bullet holes and shrapnel marks scar the external walls and columns of the Neues Museum in central Berlin.

Berlin, Germany’s capital city and the second largest in the European Union by population with 3.5 million inhabitants, has visibly lifted itself out of the darkness of the past century.

Restoration projects have repaired or rebuilt much of what Allied bombing raids and the Battle of Berlin wrecked.

But in certain high-trafficked spots—Museum Island, the giant granite dish in the Lustgarten, and Kaiser Wilhelm Memorial Church, to name a few—the wounds remain, intentionally. They’re meant to serve as reminders of the atrocities of war and that the only outcomes are destruction and death.

Such symbols, while eerie, reveal how the Germans of today recognize the war: not brushing it under the rug nor, conversely, memorializing a mighty machine of conquest and annihilation, but rather merely accepting the irreversible facts of the past and letting the wounds speak for themselves.

Below are instances of those wounds I noticed during my recent trip to Berlin.

Keep up with the latest by subscribing to the free newsletter and by following Michael on Twitter.

No Supported Files in Gallery