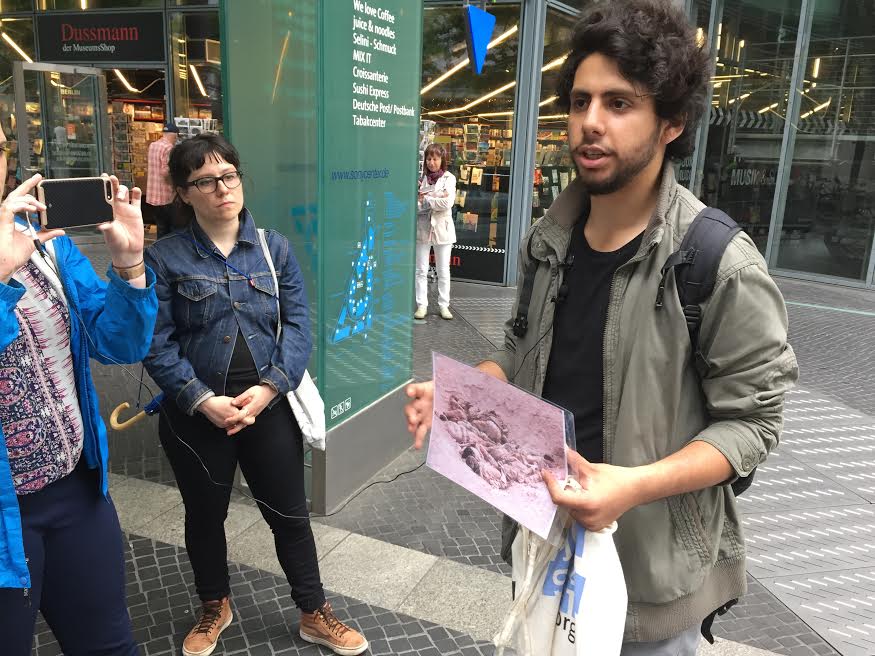 Nafeh Kurdi, a 20-year-old Syrian refugee, holds a photo of dead bodies from the conflict there while giving a tour of Berlin to RIAS Berlin Commission/Radio Television Digital News Foundation German-American journalist exchange fellows. He has lived in the German capital since fleeing Syria in 2015. (Photos by Michael Stone)

An apartment tower in Berlin being rented by the Red Cross to house refugees.

Nafeh Kurdi remembers the images of splattered red after the bombs fell.

“It was very hard for me to see the blood on the floor,” the 20-year-old from Syria said.

Amid the gruesome fighting in Syria, the strike had hit Kurdi’s university in Damascus, the country’s capital. It, plus his reluctance toward being pulled into the military, led him to make a difficult choice in 2015 at age 18: to flee Syria, like 5-plus million others have.

Though relatively short — 10 days instead of the months it takes others — the journey by foot, bus, plane, train and boat came with perils aplenty, and all the while, he had only the small essentials he could carry.

Perhaps the most arduous part: getting into Europe via Greece by boat. The 35 people in Kurdi’s group paid a smuggler $1,000 each for the trip. Soon after launch, the boat proved unseaworthy, and the group had to swim back to shore for another try.

The next time, they made it across, and he eventually managed to zigzag upwards to Germany, which has become a haven for refugees in the past few years. The total cost of his 10-day trek from Damascus to Berlin: about $3,000.

In the two years since, Kurdi has progressed his English to fluency and has also worked on his German. He and a friend grabbed a good amount of attention for a Facebook post detailing their offer of volunteer help for other Berlin refugees.

In addition, Kurdi has found work as a tour guide, and through this, he’s able to relate current Middle Eastern conflict to the dark past of Berlin: guards stopping him personally at Syrian checkpoints, like in the times of the Berlin Wall, for no reason other than to try to get a payoff; Syrian soldiers digging tunnels, like those trying to escape East Germany, for shelter from bombs; and the torturous death of war and tyranny.

Kurdi’s ultimate goal in Berlin is to study economics and then return to his home country once the fighting stops. It’s there where, despite the troubles, much of his soul remains.