30/01/2015 No Comments on Kurt Vonnegut Quotes: My Top 5 Excerpts from Slaughterhouse Five 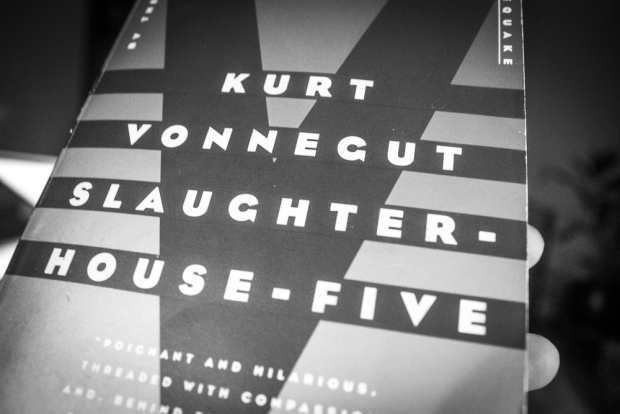 After tackling Cat’s Cradle and Breakfast of Champions, the next clear Vonnegut choice was his magnum opus, Slaughterhouse Five. The story centers around Billy Pilgram, a chaplain’s assistant in the U.S. Army who bounces around in time throughout the novel and, most significantly, witnesses the Allied bombing of Dresden toward the end of World War II.

I hate plowing through a book, running over clever prose, and then disregarding it into eternity with the turn of the next page. So I whipped out a highlighter and found these passages worth a page-corner fold.

1.“The visitor from outer space made a serious study of Christianity, to learn, if he could, why Christians found it so easy to be cruel. He concluded that at least part of the trouble was slipshod storytelling in the New Testament. He supposed that the intent of the Gospels was to teach people, among other things, to be merciful, even to the lowest of the low. But the Gospels actually taught this: Before you kill somebody, make absolutely sure he isn’t well connected. So it goes.”

2.“A prison administrator dealing with captured American enlisted men for the first time should be warned: Expect no brotherly love, even between brothers. There will be no cohesion between the individuals. Each will be a sulky child who often wishes he were dead.”

3.“They saw the dead hobo again. He was frozen stiff in the weeds beside the track. He was in a fetal position, trying even in death to nestle like a spoon with others. There were no others now. He was nestling with thin air and cinders. Somebody had taken his boots. His bare feet were blue and ivory. It was all right, somehow, his being dead. So it goes.”

4.“Another Kilgore Trout book there in the window was about a man who built a time machine so he could go back and see Jesus. It worked, and he saw Jesus when Jesus was only twelve years old. Jesus was learning the carpentry trade from his father. Two Roman soldiers came into the shop with mechanical drawing on papyrus of a device they wanted built by sunrise the next morning. It was a cross to be used in the execution of a rabble-rouser. Jesus and his father built it. They were glad to have the work. And the rabble-rouse was executed on it. So it goes.”