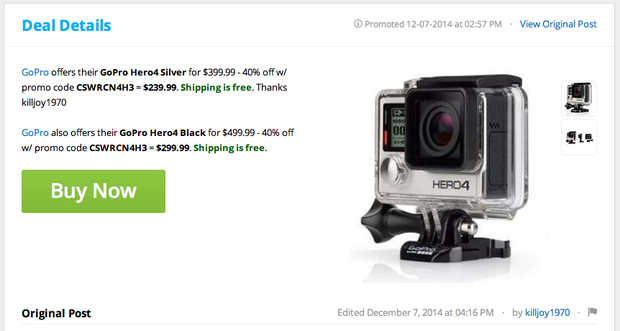 The promo code, as it appears on SlickDeals.net.

I had been wanting to get a GoPro for a while, so I was excited when a friend of mine sent me this link to a promo code that offered a nice discount, which I assumed was a Christmas special. The discount was 40 percent off the HERO4 Silver, taking the $400 camera down to $240.

After a week or so, I hadn’t received the camera or heard from the company. So I called GoPro to track the package.

But this is where some disappointment came in.

The code I used, the customer-service guy told me, was meant for a single customer because of a warranty issue with her or his already-purchased camera. But the code somehow leaked to the masses.

All the customers who used the promo code didn’t get their cameras shipped, and they weren’t charged or were refunded. Needless to say, GoPro received many calls from “lots of angry customers,” customer-service guy said.

He also informed me that there was nothing he could do for my order except help me purchase the camera for full price.

While I am understanding of GoPro’s predicament and that they want to maximize while this wave of camera popularity lasts, there are some obvious flaws in how they handled this.

First, they should have never put a promo code out there that could be used by everyone if they didn’t want everyone to use it. Promo codes exist for almost any kind of online purchase, and it’s standard for online shoppers to Google search them before buying. But I’ve never heard of a company not honoring one that works on their actual website. (If you have, please let me know in the comments.)

Second, they should have proactively informed buyers that they wouldn’t be receiving an expensive product they purchased. This, instead of leaving them to wonder and eventually seek an answer.

And third, they should have offered some kind of discount—be it 10 percent or whatever—to customers who used a legitimate promotional discount through the company’s actual website. This, instead of pretending like it never happened.