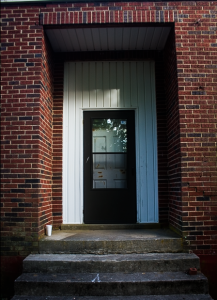 The backdoor, which would have been a double door when my grandfather helped dynamite it, of Little Pine Elementary School.

It’s funny to learn about how the course of your life changed before you were even born.

My grandfather, his brother, two cousins, and two friends were bored on Halloween 1959, so they decided to use dynamite to blow up the backdoor (right) on Little Pine Elementary School in the rural mountain town of Ennice, North Carolina. One of my grandfather’s cousins (he doesn’t know if it was one of the two there) ratted him out, so he decided the best thing to do was “get out of dodge” — especially because the parents had to help pay for the repairs.

So he, one of the cousins, and one of the friends joined the Army less than a week later. While most of his family and friends stayed within Alleghany County their whole lives, my grandfather — who originally had the dream of building a house atop Thomas Knob there — turned mobile from the military, which led him to Korea, Germany during the Berlin Crisis, various management positions around the country, and eventually Chattanooga.